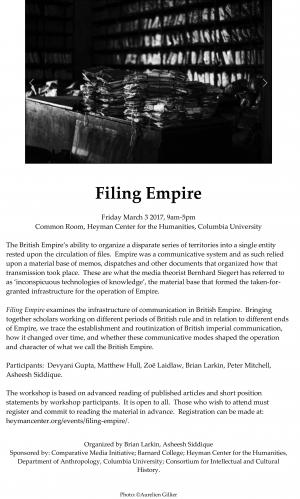 The British Empire’s ability to organize a disparate series of territories into a single entity rested upon the circulation of files. Empire was a communicative system and as such relied upon a material base of memos, dispatches and other documents that organized how that transmission took place. These are what the media theorist Bernhard Siegert has referred to as ‘inconspicuous technologies of knowledge’, the material base that formed the taken-for-granted infrastructure for the operation of Empire.

Filing Empire examines the infrastructure of communication in British Empire. Bringing together scholars working on different periods of British rule and in relation to different ends of Empire, we trace the establishment and routinization of British imperial communication, how it changed over time, and whether these communicative modes shaped the operation and character of what we call the British Empire.