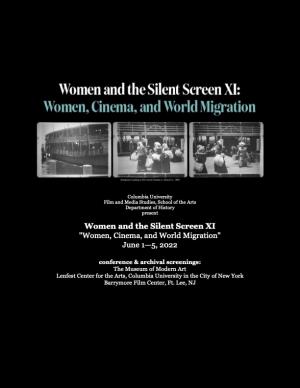 For 22 years, Women and the Silent Screen (WSS), a biennial international conference sponsored by Women and Film History International (WFHI), has brought together researchers focused on women’s pivotal roles in the first decades of motion picture history. WSS has supported the creation of a new view of the film industries that demonstrates the centrality of women in economic and labor history, criticism, aesthetics, narrative development, film culture, and film production in a globalized world.

In June 2022, Columbia University in New York hosts WSS XI: Women, Cinema, and World Migration to highlight new scholarship connecting early cinema history to the migration and social mobility that caught up women globally when motion pictures arrived more than a century ago. We invite students, scholars, distributors, curators, and archivists from around the world to return to where the U.S. film industry began to explore how the new medium intersected with women’s movement across boundaries of gender, ethnicity, race, and class, considering occupational and national borders that excluded some women and welcomed others.